Like pretty much every car company by this point, Lincoln has centered its crosshairs on an electrified portfolio. Just before Ford’s luxury brand revealed its electric concept, Lincoln’s famous hood star emblem glowed visibly under the sheer silk covering. As a presentation, it wasn’t subtle, but it was certainly in keeping with the theme of the presentation: light, transparency, and electricity. Lincoln president Joy Falotico says that by 2025 the brand will offer three new electric vehicles, with a goal of half its global volume being EVs before 2030. The Lincoln Star concept—again, not so much with the subtlety on that name, but we appreciate the point—was created to showcase Lincoln’s approach to design and experience on an electric platform.

Before pulling back the sheet, Falotico spoke about Lincoln’s 100-year history, and how looking to the past offers inspiration to the future. She specifically mentioned the designer label Continentals of the late 1970s, saying that the current Black Badge series cars reflect that same level of personalized luxury—although, sadly, they’re not available with Givenchy green velour. Even without velour interiors, Lincoln has reported its best sales in 21 years, up 7 percent globally in 2021 versus 2020, and is reaching a younger audience with an average buyer age in the early 50s. With its internal-combustion vehicles, Lincoln has focused on interior comfort, aiming for airy spaces with architectural details and unexpected high-end materials along with a customer service experience based around its Black Label trim and boutique dealership experiences. It aims to build on that with the upcoming EVs, creating a “third space,” outside an office or home, in which customers want to spend their time. With that, the sheet came off.

The Star is a good concept, in that it’s startling. It doesn’t look like a mildly decorated production car; it looks unreasonable, abnormal, conceptual. Our first thought was of an Apple wireless mouse, dramatically sloped and edged in light. It’s almost shockingly unadorned on the sides, with a wide expanse of door between the wheels. This was a conscious design choice, says Earl Lucas, Lincoln’s chief exterior designer. “You can put too much into a design,” says Lucas. “Overdo the detail, more convex shapes on it. But it starts to be fussy and it loses the elegance. And that’s the number-one thing that I have to convey with our brand, because the brand has to be noble, regal.

“You know, exotics, when they have all the scoops and all that, it communicates a certain amount of testosterone. But when you go more elegant and more simplistic, it says this is a luxury, premium brand and I’m gonna stand the test of time.”

Lincoln, says Lucas, is confident enough not to need wings and scoops, but it does lean heavily on lighting. Electric vehicles sit lower, and without the big grilles Lincoln has used to imposing effect on its gas-powered SUVs, it aims to capture attention by literally shining a spotlight on itself. The grille star glows, the headlights move and run up the see-through hood, illuminating a latticework beneath, and the lights change to greet the owner both inside and outside the car.

Light shows are not new, but we were impressed by Lincoln’s use of transparent materials. The frunk lid up front is electrochromatic glass, allowing light in during driving or going dark to hide the contents while parked. The A- and D-pillars are also transparent, with a structure created from a 3D-printed carbon honeycomb. Visibility and a sense of free space were priorities in the twining inside-outside design. Things like the conveyor-belt opening of the frunk or the honeycomb pillars might not be feasible in immediate production, but they show a willingness to think of unusual amenities, which we think will be crucial in the EV market as options for electric vehicles continue to increase. Connectivity is another popular buzzword, here shown in the form of Lincoln Attaché, a compartment in the rear door that acts as a “digital briefcase,” housing tablets or laptops while charging and connecting to Wi-Fi. You will never escape your Slack messages in the future, but at least you can sit somewhere comfortable to read them. 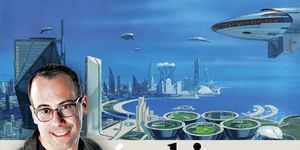 A Look at Syd Mead’s Future Past

Inside, the Star makes use of the big space with the somewhat expected swiveling front-seat to rear-seat living room arrangement—we blame Syd Mead for making designers think we want to have tea parties in parking spaces—but also offers reclining lounge chairs, a refrigerator, and extending leg rests. The front half of the cabin lights up from floor to door, and a curved screen sweeps across the dash. Were this a working vehicle rather than an exercise in imagination, the screens would play different animations depending on your mood or time of day, and connect you to a digital assistant who could arrange carwashes, make dinner reservations, or just find and park for you, so you could swivel your seats and break out whatever was in the glass refrigerator.

Because this is only a concept, we have no details as to its propulsion. For all we know, there’s a two-stroke gas engine in the back to move it on and off stage, but Lincoln has a flexible battery architecture with options for one- or two-motor configurations, so the production EVs should come with the ability to move themselves and respectable power and range numbers.

Our favorite detail on the Star is the rear cargo area, which opens in an explosion of panels and hatches like some sort of double-jawed alien, only with the goal of providing a cozy tailgating spot, not eating your face. It looks like a perfect drive-in-movie machine. The Star won’t make production, but hopefully the tailgating hatch does. How much we care about bad news world map